I arrived twenty minutes early to find a rehearsal-before-the-rehearsal in progress. Bleach blonde rehearsal director Deborah Lohse, a good friend who tipped me off to this OCD-ish meeting of a small section of Group B, called out steps with names like the “stomachache/backache”, “trucker”, “fish”, and “tambourine”. An extremely diverse group of about twenty-five people–all ages, races, genders, and types are represented in this feat of casting–were hard at work trying to recall and build muscle memory for these moves. It is easy to forget just how hard it can be for an average pedestrian to make shapes with his or her body, something professional dancers obviously take for granted. But there is a reward for this struggle. There will be a performance. 150 New Yorkers will dance in Sylvain Emard’s Le Grand Continental, described as a combination of “festive line dancing with the fluidity and expressiveness of contemporary dance”, this weekend as part of the River to River Festival (in conjunction with the Joyce Theater).

Deb rehearses a small section of Goup B before the actual rehearsal.

Group B commits to the 'shimmy'.

But a month ago, the Group B rehearsal was still in a critical stage of learning choreography. By the time Deb began drilling the room on a miniature improvisation, it was bursting to nearly 75 dancers.

“Alright, here it is, four counts of unchoreographed joy, give it to me!” Deb bellowed, eschewing the use of a microphone.

Not surprisingly, this unspecified jam was as difficult for the group to let loose on as it was to hammer out the other specifically coordinated arm and leg movements. Deb remained unperturbed, determined to not let an opportunity like this slip away. And so over and over again, they wiggled, bounced, twisted, and shook to her gleeful prodding, attempting to reach that exalted place of dancing like you are the only person in the room for a quick 5-6-7-8. 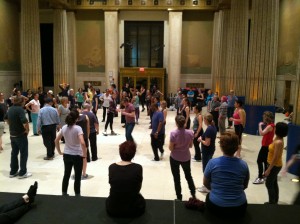 Sylvain (center in striped tee) breaks down a phrase.

A couple weeks later, on a rainy Thursday, I stopped in on another rehearsal in the lobby of a financial district building, to see how the merging of Group A and B was coming along. It was fleet week and tourist sailors were taking video of the free show from the doorway. Sylvain Emard, the choreographer from Montreal who is currently setting this production in Philadelphia and Portland, OR (and it seems ripe for an episode of Portlandia!) as well, was in town.  The room was dissecting “the jungle” step and Sylvain asked the amateurs to explore “the branches.” Deb was in the corner working out the intricacies of a formation chart for so many dancers. With only two weeks left of rehearsal, these disparate groups were undergoing a pivotal evolution: moving from the micro questioning of “what am I doing?” to the macro realization of “I am part of a group performing together in a set formation.” 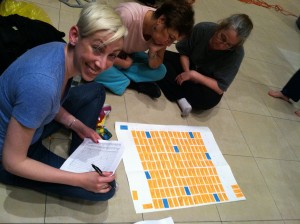 Dancers working on 'the jungle' step

After a pep talk and q & a session ended the rehearsal,  Sylvain, Deb, and I went for beers at an Irish pub around the corner. We toasted the progress. A group had coalesced. Deb and Sylvain beamed like proud parents. I smiled too, thinking about how dance and performance can be a reflection of co-existence.

Each performance will be followed by a DJ dance party on Pier 17 on the following schedule: