I may have already mentioned that I am a fan of Alex Ross’s writing. So far, the preface has set me at ease with his reasoning for a broad approach, taking “the concept of progress” with a grain of salt, unlike most music histories of the last century (I do not actually know if this is a true statement since this is my first somewhat comprehensive music history book, but I appreciate the sentiment). In the first two chapters, my mind was expanded with how the details of this particular history were dealt in relation to the important cultural paradigm of the day, “vox populi, vox Dei”. While we are still near the beginning of this tome, Chapter 3 has delighted me in its meditative loop: dispel artifice in order to embrace the sublimity of artifice.

1 : clever or artful skill, an ingenious device or expedient 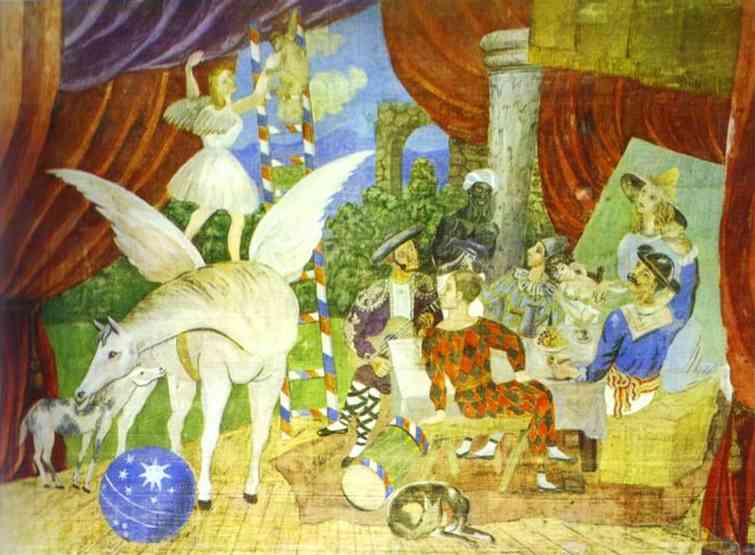 On page 84, three pages into Chapter 3: Dance of Earth, Ross writes of the new reality, or “essence of naturalism in late-nineteenth- and early-twentieth-century art” mentioning Gauguin, Monet, Zola, Gorky, and Duncan in contemporary relation to Stravinsky, Janacek, Bartok, Satie, and Les Six. “In whatever medium, artists worked to dispel artifice and convey materiality of things.” He seems to be using definition number two (from above), asserting the artists were in opposition to the posturing and pretension of Vienna and Bayreuth. But by the last sentence on page 129, Ross comes around to definition number one: “As in Yeat’s poem, European composers embraced the sublimity of artifice, ‘to sing/ To lords and ladies of Byzantium/ Of what is past, or passing, or to come.'” The artful skill was seen again as sacred.
Thinking of this word has brought me to a new approach this week. Let’s discuss this chapter in relation to artifice, both the ingenuity and the trickery: what the above definitions meant to the composers, who were often emigres in a tumultuous time of shifting alliances and borders, to the music they made, to you,  and our current culture. There is a polar tension in these two ways of viewing one word that seems to be an ingredient for an exciting artistic culture.
How did artifice form, affect, or transform (your perception of)……
*Bartok’s discovery of the “archaic avante-garde” and subsequent fascination with “bent” and “wrong” notes of rural music? How does the work of ethnomusicologists like Bartok change our given perspectives on what is art vs. craft in music and other art forms?
*The ambivalent portrait of Stravinsky, as Ross relates, “In later years, Stravinsky preferred to describe himself as a deracinated modernist, a dealer in abstraction, and went to some lengths to conceal his early folkish enthusiasms” (94). Does Stravinsky embody the paradox of both definitions of artifice? And if he does, can this explain our high culture’s never-ending adoration of him, as we vacillate in the rough modern waters of reality television and fictional politics?
*The geographic dislocation of most of the composers in these chapters? Does culture and nationality ultimately influence ideas of artifice?
*The emergence of popular music? Does one definition more aptly apply to jazz and blues and Broadway?
*Les Six and Cocteau’s call for “music I can live in like a house”? Were they just reactionaries to decadence and was their musical reaction decadent?
*A return to sacred art, a need for composers to purify and rehabilitate (Stravinsky’s return to religion)? Is this the ultimate in artifice?
*The odd reception of Ravel’s La Valse?
* Bartok’s confusion, Stravinsky’s disgust, and Ravel’s brush off due to dislocation by the youth and the new ISCM (International Society for Contemporary Music)?
*Do we still live in a world that is not for old men?
Discuss, pose questions, bring up topics overlooked. You can chime in on last week, Chapters 1 and 2 here.
(And don’t forget, this week’s schedule has us reading Chapters 4 and 5. Email any questions or topics to hello@diydancer.com by Sunday if you are so inclined.)
alex ross, artifice, Bela Bartok, candice thompson, classical music, Dd Book Club, discussion, duality, Erik Satie, ethnomusicology, Igor Stravinsky, Isadora Duncan, ISCM, Jean Cocteau, Leos Janacek, Les Ballets Russes, Les Six, music, Pablo Picasso, Paris, Rite of Spring, Sailing to Byzantium, Serges Diaghilev, the rest is noise, William Butler Yeats