It still amazes me that for over six months I worked on the Lincoln Center campus, passing the Lincoln Center Film Society every day, and didn’t see either Pina or First Position. I saw the posters and went on to friends and family about how much I wanted to see the films. Yet, every week, I continued to come up with a lame excuse. “I will go next week,” I kept telling myself. I still haven’t seen either film.

So when I heard that Nederlands Dans Theater’s Move to Move was playing at the Dairy Center for the Arts in Boulder, CO I was determined not to repeat my recent cinematic track record. The film was part of the Dairy Center’s Ballet in Cinema series, which showcases a wonderful array of dance films on the big screen throughout the year. It didn’t matter that I was tired, sore, or a little grumpy; no excuse could justify missing out on this opportunity to witness the remarkable talent and ingenuity of this illustrious Dutch troupe.

On a rainy Tuesday night, I made the Northern trek up Highway 36 and settled in for a 168 minute journey across the Atlantic Ocean and into the simple, yet elegant auditorium of the Hague’s Lucent Danstheater. The film was not a documentary about NDT, but rather it captured the company’s live performance on May 31, 2012 and wove in moments of behind-the-scenes ‘exposes’ throughout.

The first choreographic gem was Alexander Ekam’s Left Right Left Right, choreographed on and performed by NDT II. Described by the program notes as a ballet that “revolves around concentration, timing, and rhythm,” the piece was inventive, contemporary, and captivating. But, honestly, during the first few moments, I had my reservations. Dressed in bland suits, the entire ensemble stood onstage, gawking awkwardly at the audience as a girl in a red dress crossed the upstage slowly and methodically. In the background, the faint, haunting sounds of music from another time could be heard. The dancers moved in spurts, short bursts of energetic movements and gasps of exhalations and inhalations. I feared this piece would not be my ‘cup of tea.’ 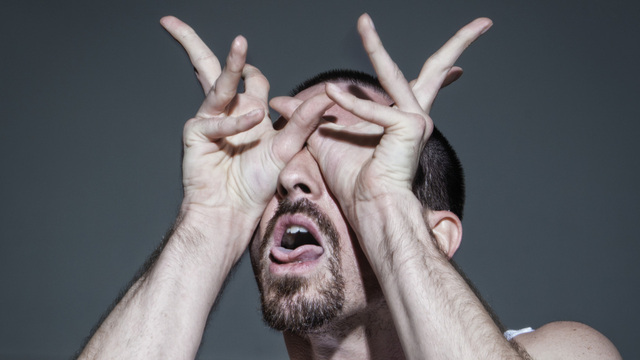 But, as it evolved, I found the theatricality and frenetic movement enthralling, engaging, and, at times, hilarious. The commitment and focus required by the dancers was astounding. I was entertained and challenged simultaneously. In the final section of the piece, the dancers walked, jumped, skipped, danced, and leaped on moving treadmills, executing both unison and individualized choreography. It grabbed my attention and held onto it until the very end.

Resident choreographers Sol Leon and Paul Lightfoot’s dramatic Silent Screen followed, featuring the main company and famed contemporary composer Philip Glass’s Glasswords. The ballet was described as a journey, following a “couple in love” and a young girl as they decipher life’s many different emotional stages. Storytelling appeared to be an integral part of Lightfoot and Leon’s choreography. Here, they used extraordinary multimedia effects to help unfold the ballet’s story. The dancers are stunning, approaching each movement with incredible maturity, integrity, and technique.

Next on the program was Israelis choreographer Ohad Naharin’s Secus, which is an excerpt from his work Three. Interestingly enough, this is not the first time I’ve seen this ballet. The first time was in Minneapolis, MN on Naharin’s own company, Batsheva–which is, to this day, one of the best dance performances I’ve ever seen. The second time I saw this work was last fall at the New York City Center, performed by Hubbard Street Dance Chicago. Each company brought its own flavor to the ooie-gooie choreography, and I was thrilled to see NDT impart its own interpretation.

I love everything about the gaga movement language: its no-bones fluidity, its dynamics, its vibrancy, its unrefined, raw edginess. And watching the amazing dancers of NDT dance the style was a true treat. Again please!

Admittedly, I did not stay for the final piece on the program, which was the world premiere of Leon and Lightfoot’s Shine a Light. It was not for a lack of desire to see it, but rather a desire to rest up for the next day of rehearsals. With these new visions of dance swarming through my head, I was inspired and excited to return to the studio. So I slipped out of the theater quietly and embarked on the 45 minute drive back to Denver with my radio turned up and a satisfied smile on my face.

I love it when dance can still do that to me!

Stephanie Wolf
Stephanie Wolf is a public radio journalist based in Louisville, Ky. She's also a DIYdancer co-founder, and developed and produces DIYdancer's UnSequenced, a podcast about the choreographic process. She danced professionally for 12 years with ballet and opera companies.
Recommended Posts