It is no great revelation to observe that a perennial lack of funding is one of the greatest sources of discontent within the American dance community. From top-tier, nationally renowned companies that might have cause to slash dancer salaries or performance seasons when financial times get tough, to frustrated freelance artists, who frequently find themselves cobbling together a motley mix of gigs and odd jobs in order to survive — nearly every entity in the industry suffers when a faltering economy collides with increasingly intense competition for resources and a seemingly ebbing interest in the culture of dance.

Yet however palpable the woes of a downtrodden dancer, the tools necessary to rise above less-than-favorable circumstances are not tangible at all. As Summation Dance co-founders Taryn Vander Hoop and Sumi Clements discovered, patience, persistence, and endless imagination go a long way in molding an ideal into reality — or perhaps more accurately, molding reality into their ideal.

Within the space of roughly two years, Summation Dance has made its presence known on the New York City dance scene, both producing its own shows and making the rounds at dance festivals and conventions. Launching a new business in any sector requires a sturdy game plan and no small amount of fortitude — both of which Vander Hoop and Clements had developed by the time they earned their Masters in Fine Arts from New York University’s Tisch School of the Arts. What began as a one-time post-graduation performance project rapidly evolved into the establishment of a small company that presented its first evening-length work to a sold-out house at Baryshnikov Performing Arts Center in 2010.

The secret to Summation’s success?

“Before we even had our first piece choreographed, we decided to split roles,” Vander Hoop explains. “I would be Executive Director and Sumi would be Artistic Director.” This separation of responsibilities allowed the duo to bring their company and their vision to life in a very short amount of time. Employing several fellow Tisch dancers, along with a few fresh faces found through auditions, choreographer Clements began to create. From the start, she knew that maintaining several constants, such as a consistent core of dancers and a regular rehearsal schedule, would be crucial. “As a choreographer,” she says, “I’m able to experiment more when I know exactly what everyone is capable of so far. When I’m challenging myself, they’re also being challenged.”

Outside the studio, Vander Hoop faced a different kind of challenge, one that ultimately opened an entirely new avenue for the company to explore. “When we were starting our company, and trying to explain to people what we were doing and get them excited,” she relates, “the common issue was that people outside of the dance world had no idea what modern dance was…They had never seen modern dance.”

From this realization emerged the now annual outreach program Dancing Literate, a combination performance and seminar event intended to expose new audiences to and allow them to interact with a realm of art with which they have no relationship. This year’s event — scheduled to take place at Judson Memorial Church on December 6th, 7th, and 8th at 7:30 pm — will feature a preview of Clements’ current work-in-progress, Pathological Parenthetical Pageantry, along with new pieces by Claudia Anata Hubiak and Sydney Skybetter. Gina Gibney, Sidra Bell, and Seán Curran have each signed on to host an evening and moderate post-show discussions. 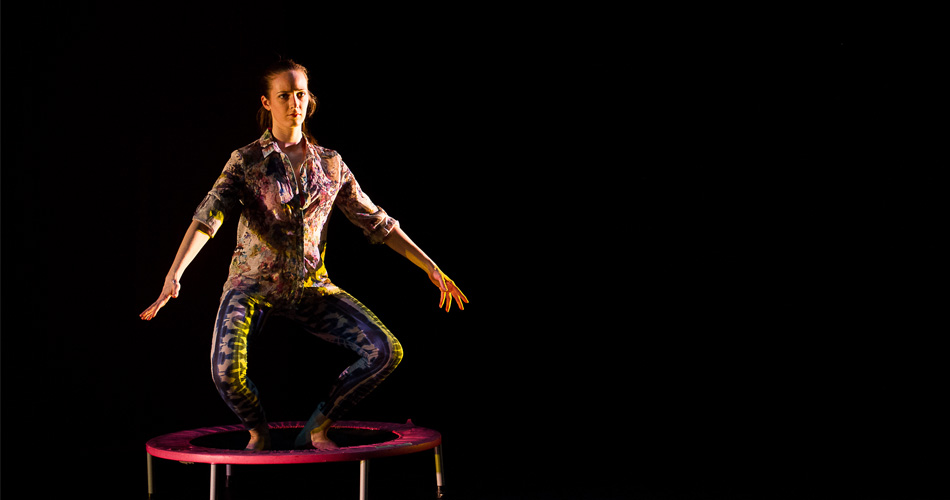 As a result of the outreach efforts that fueled the inaugural Dancing Literate last year, Vander Hoop proudly reports, “our audience is never primarily dancers. We’ve really focused our outreach towards other professional communities.” In other words, she and Clements have created for themselves the support base that so many dancers and dance companies feel they lack.

As Summation Dance moves into its third year of existence, the company shows no signs of reigning in its momentum. Within the next two months, Summation will participate in a female choreographers’ showcase at the 92nd Street Y; the Reverbdance Festival, a part of APAP, 2013; and Flicfest, a Brooklyn-based festival of full-length dance works. Of course, the company’s own evening-length show at the Brooklyn Academy of Music (BAM) in April and its San Francisco tour later in the spring are great sources of excitement for Summation’s founders, as well. Yet as Clements points out, “it’s really important to take part in things that other people are curating, because producing your own work can be very isolating… The events you’re participating in that you’re not producing, that’s where you find new audience members.”

Summation is also committed to allowing other choreographers into the fold, as the group did with Andrea Miller last year and Sydney Skybetter this year for Dancing Literate. Even for Clements, who seems to be constantly embroiled in the creative process, reaching into the company’s ever-expanding network of dance-makers is rather refreshing. “I actually enjoy not being in charge for a week at a time,” she admits. “I enjoy performing in someone else’s work, because I was a dancer long before I was a choreographer.”

But neither Clements nor Vander Hoop complains about the large expenditure of time and energy, and the assumption of heavy responsibility required to propel a business — and their own performance careers — into success. Rather, they appear to relish each obstacles as a new opportunity, never allowing their motivation or their mission to crumble. “You need to say something’s going to happen, and then figure out how,” Vander Hoop asserts. “Unless you set really difficult goals, of course nothing is going to happen, because no one else will set them for you.”