The latest in Irvine Barclay Theatre’s international 2013 Contemporary Dance Series was Italy’s Spellbound Contemporary Ballet, formerly known as Spellbound Dance Company, under Artistic Director and choreographer Mauro Astolfi. Resplendent in gestural detail, with seeming physical impossibilities swiftly and soundlessly achieved, the work was exemplary of much European contemporary dance. Although that title is cumbersome and definitely too general, to me it connotes a cosmopolitan, intellectual group of dancemakers and dancers; dancers who slide across the stage in socks with a certain introspectiveness, and who manipulate one another in partnering of infinite possibility. To be sure, the category extends far beyond the European continent, enjoying considerable popularity here, where repertory companies such as Hubbard Street Dance Chicago and Alvin Ailey American Dance Theater, under Artistic Directors Glenn Edgerton and Robert Battle, respectively, regularly perform European choreographers’ works.

Meanwhile, my companion could not vouch for much familiarity with contemporary dance at all, European or otherwise, although she once had dinner with American Ballet Theater principals Irina Dvorovenko and Maxim Beloserkovsky. “A lovely couple,” she mused, her eyebrows lifting as the lights dimmed and the curtain lifted. “Anyway, Italy. World’s greatest aesthetes.” The red rose to reveal a black background and two men, shirtless but in black pants, with lighting designed by Marco Policastro that accentuated flesh and curving rib but left most of the space shrouded in darkness. A man’s voice penetrated the first notes of Loscil’s “The Making of Grief Point,” reciting words similarly enveloped in darkness. I caught the phrase, “I think the world does not like me grim. It likes me melancholic, but not miserable.” Certain words were repeated and therefore stood out–“wrong, wrong.” Others became lost in the din of forward-moving time and the three-dimensionally snaking bodies. Like the words, the moves were pouring forth; some discernable, others not, reminiscent of two bears nosing one another in the beginnings of a fight or rough play.

Women entered, wearing slinky skirts and nude bras. Their femininity was distinct but somehow not altogether separate from the masculine. The palette of skin-colored torsos lent androgyny to the scene, but even aside from costume the sexes seemed to blur together onstage; the women were armed with the same heft of muscle and lean limb which the men displayed. Men partnered men and women, women partnered women and men, and hetero pairs didn’t appear to have any sort of physical advantage when it came to the big lifts that are normally restricted by necessity to large men and tiny women. It was astonishing, actually. And, so far, my friend had been correct. Physically, these dancers looked Olympian, and as they began to move, they exhibited the full breadth of classical ballet technique as well as the smooth, seamless transcendence of it. Their quiet command of the stage recalled a collection of powerful snakes on display, and the rippling musculature of their entwining, undulating bodies gave off a similar illusion of bonelessness. The simplicity of the costumes and the way the women’s skirts moved was both aesthetically pleasing and effective in revealing the intricate choreography performed by the dancers’ expert legs.

Throughout the work, which was titled Lost For Words: The Invasion of Empty Words, the choreography unraveled quickly, spilling out onto the stage in partnering and counterpoint; a dizzying vocabulary of thousands of movements transpired and then were lost. The lighting remained dim, although occasionally swords of light would enter the stage from above and pierce the floor dramatically. The text didn’t return, although the work was a meditation on communication. At its end, four pairs of dancers froze upstage in the gestures of everyday conversation while a single dancer exited slowly behind them, scanning the tableaux as she went. 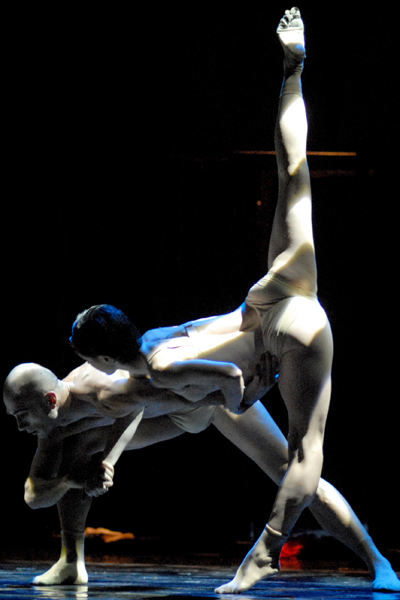 The second piece, She Is On The Ground, a premiere, was much shorter, and it veered away from the first work’s neutralizing treatment of gender. Astolfi used humor to posit,in the choreography as well as in his program notes that a female might just lie on the floor and still receive the desperate attentions of some male counterpart. It was sort of funny, but the dance retained a little too much of the first work’s complex vocabulary and inky design–the background was still black and so were the dancer’s pants—to cause too much laughter. Fortunately, its short duration and brighter Piazzolla score recorded by Kremerata Baltica and Gidon Kremer added some lightness, and the increased use of unison showcased the choreography more clearly than in the preceding work. The cute ending, in which the main character (the ever-supine female) stealthily removed one man’s jacket, and then bunched it up to use as her pillow before laying down a final time, offered welcome wit to his thesis. An excellent manipulator of human bodies and thorough investigator of space, Astolfi’s use of high and low space–not just the full area of the floor but the stage’s vertical height as well–made for dances both surprising and intriguing.

Closing the program was the 2009 work Downshifting, an abstract reflection on the choices that determine our futures, and the alternative paths available to us. Certainly the choreography mirrored this in the bifurcating pathways of dancers and in the causal methodology behind the many partnering phrases: I pull here and you turn this way and then you place your hand there so I do that. Conveniently, it seemed as if the description of this work had been fitted to Astolfi’s movement style, rather than the other way around because his other work seemed to readily employ the same choreographic devices. Perhaps his style and the notion of cause and effect are inseparable even as he tackles other issues and concepts; still, by the third piece, it felt as though he was presenting iterations of the same work with slightly different rhythm, tone, and theme. The movement still stunned, yes, and dancers I hadn’t particularly noticed before were outstanding in solo and duet sections, but after a while its lack of dynamic quality stunned me into something close to boredom. Even Policastro’s lighting, which was strongest in the last piece, resembled that of the other works, with shafts of light descending from overhead, clustered at the center of the stage in one section and spearing out to four corners where four dancers lay prone in another. Downshifting, though, had a spareness the other works lacked; the use of more repetition and more unison allowed me to sink my teeth into the work and savor it rather than chase after it. 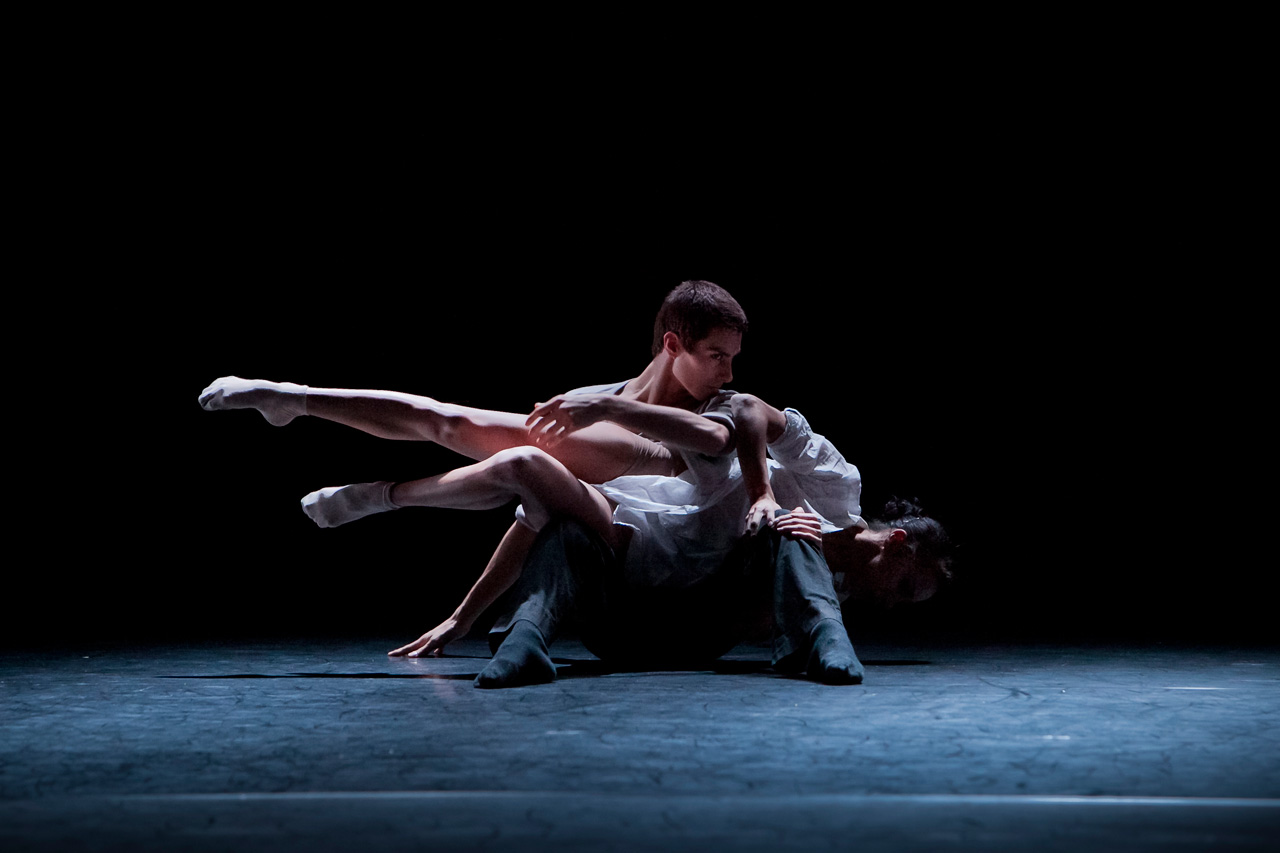 Upon leaving the theater, I was especially curious what my friend had thought of the work, and how she’d experienced the contemporary style as a layperson. She made a succinct comparison: “Like marionettes.” Folding and unfolding, intricately manipulated, both supplely mobile and deftly held: I eagerly agreed.