Breaking the fourth wall remains a risky business, requiring not only the full commitment of the performer but complete necessity, as an artistic choice, from the production. Lacking those two elements, it is an interference easily relegated to gimmick or schtick. On Thursday night at BAM’s Fisher Space, Summation Dance, a company in its 3rd season, followed their stated mission which “strives to bridge the gap between the choreographer and viewer”; addressing the audience quite directly in two diametrically opposed dances, with varying degrees of success. Aside from shattering this barrier and sharing the choreographer Sumi Clements, the only other logical connection between Shift and Pathological, Parenthetical, Pageantry was the impressive technique of the entire company. 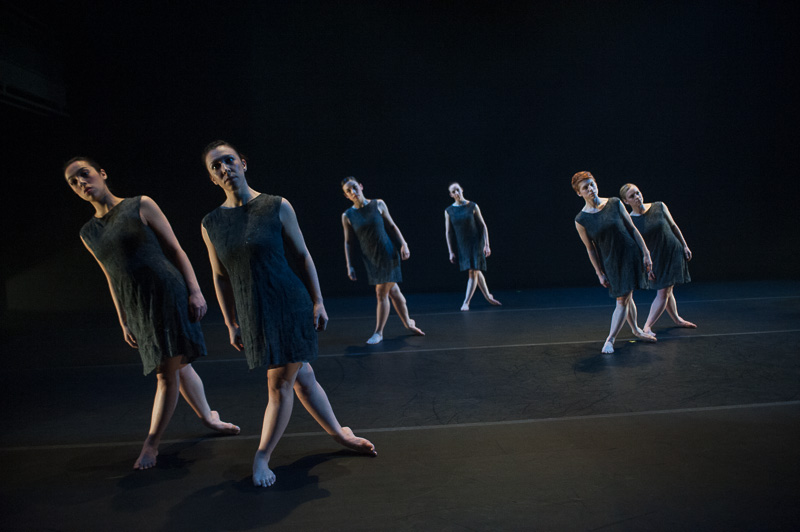 Shift opened the double bill with a stare down; a cast of nine women stopped mid-stride in an inverted and off balance pose, a sort of supinated B-plus position. They remained still for an impressive length of time, grilling the audience with their blank and yet somehow aggressive stares, heads tilted precociously, until the uncomfortable scene setting finally yielded to movement. When their heads acquiesced to a flow of choreography, whatever had been gleaned from reading the minds of the audience was put to robust use on the dance floor.  An early pas de trois mesmerized in its amorphous flow and the surprising kinetic connections made for an interesting conversation with the chain gang sound of Kyle Olson’s dark electronica score. Beyond the music, grey shift dresses and a sense that these women were caught in the waves of their steps, gave more of a feeling of imprisonment in time rather than the “shifting planes of existence” mentioned in the program. However interpreted, the execution of highly physical partnering, militaristic unison, and floor work—sideways dive rolls!—packed an explosive punch. Though it remained unclear how the opening looks related to the somewhat emotional erosion of an ending, the vitality of the moves trumped all and made the lack of connection seem unimportant.

If only the same could be said of Pathological, Parenthetical, Pageantry. Among the many questions this short and fluffy dance brought to mind, many of which began with “why,” the most bothersome was, “Has Sumi Clements ever seen the work of Monica Bill Barnes and Co?”  There were several gestures, like pulling up a shirt to show your stomach in a challenge to the audience, which appeared to be lifted right out of Barnes’s repertoire. The watch-us-make-some-moves-in-silly-costumes-while-grimacing-and-winking-at-the-audience is an aesthetic that takes many more layers of meaning (pathos!) and careful crafting to pull off well (why were the three main props upstage so underutilized?). Barnes has spent almost her entire career making such funny and poignant dances, Clements would do well to study how Barnes makes humor and dance work together. However, it is worth mentioning that the audience seemed to enjoy this vapid hipster chic display and was chuckling a good deal to the tunes of LCD Soundsystem, but what else can you do when the dancers randomly begin throwing vegetables at each other and wearing lettuce like a fedora? 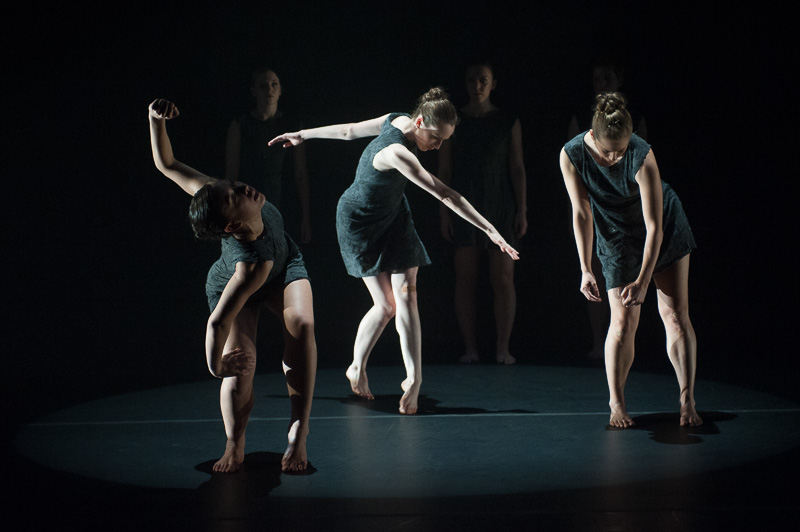 Bringing such diverse moods into a cohesive evening of dance is a difficult task. Curating which pieces to include is just as important as deciding the order in which those works are seen. Off to a good start, Summation Dance now needs only to utilize their talented dancers to their fullest and manage the conceptual and emotional trajectory of the evenings they present. Anything less undermines the possibility of the next season being so bright, it just might require shades.