By the second piece on Royce Program A of Trisha Brown Dance Company: The Retrospective Project presented by UCLA’s Center for the Art of Performance, I liked Trisha Brown. In a concise solo called Watermotor, Samuel Wentz performed quick and precise movements. Wentz’s long, sweeping arms moved in and out of simple and complex coordinations in which his head, body, and legs seemed to slurp up the floor as he moved across it. The piece ended abruptly; like a course being cleared from the dinner table too soon, I experienced an unsatisfied longing for what I had just witnessed. Fortunately, there was more to come, and by the third work, Foray Forêt, I began to harbor a crush.

Let me be clear: I usually try not to let “like” and “dislike” influence my writing. However, when the choreographer’s name is one you have heard since you first embarked toward the relatively small modern dance world, you’re bound to carry preconceptions. Fortunately, mine weren’t based on much; I had only seen the company in performance once, at Fall For Dance in New York in 2011. The Retrospective included works created during a career that has spanned more than 40 years and several nontraditional performance spaces, now including the vertical side of the Eli and Edythe Broad Art Center at UCLA and the roofs of the Getty Center; an installation performed on an intricate set piece devised of used clothing woven over a steel frame; and several documentary films. Where had I been?

The glimpse I caught during the 1 hour, 50 minute presentation I attended included work from 1978, 1983, 1990, and 2011, and featured collaborations with artist Robert Rauschenberg, lighting designer Jennifer Tipton, and–this was the clincher–the local Hamilton High School Marching Yankee Band. So let’s return to Foray Forêt. Its costumes were a bright metallic gold (and were perhaps the only component that didn’t seem quite timeless), but the backdrop rounded out the palette, displaying two huge goldish-purple diagonal streaks of color that gradually deepened in hue and changed direction throughout the piece.

For its entire duration, I was thinking, “wow, this music sounds eerily as if it’s coming from somewhere inside this building–but no way. It is marching band music!” It made its presence known through a long crescendo and a trick played out—the one where you’re not sure if any music is really playing at all or if it’s merely lingering creepily in your head, a radio song that got stuck there and now insists on running itself out as you attempt to go about your business, of watching this dance unfold in silence. But the music really was there. It included the type of homecoming parade standards that one unknowingly knows; the names of the songs and their lyrics floated annoyingly close to surface level in my brain. Apache! Jump on it! There was one. The players were audibly amateurs but lively. Unintentional squeaks occasionally jolted the flow of a tune, but when the band finally marched through the auditorium during intermission to receive their much-deserved applause, I saw how young and bright they were, happily flushed by their performance. I will admit that it was only then that I realized the real-sounding band was a real band. And then I loved Ms. Brown even more.

These sorts of details affirmed the choreographer as an artist not only willing to engage communities in her work, but willing to step back and take risks, facilitating a dance ultimately dependent on the coming together of many moving parts. This is not to say that the choreography itself was not thoroughly crafted. On the contrary, the pinwheeling movement possessed a strong sense of continuity as Brown took it all the way into the wings. Entrances and exits often involved a partially seen assist, and in one section, each dancer memorably occupied a wing and performed a phrase in unison. From where I sat, I caught glimpses of fingertips and knees. Throughout the work, the movement phrases suggested a mastery of subtlety and specificity, the body itself seeming to represent a shifting puzzle with no single solution. 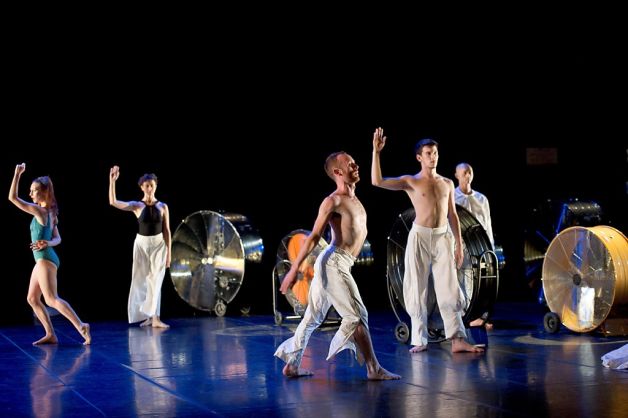 The final work on the program was also the final work Ms. Brown created for her company. It was titled I’m going to toss my arms- if you catch them they’re yours, and the movement wholly embodied this premise of individual action and easy interdependence among the dancers. Situated on stage left were several industrial-sized fans, and the backdrop had been removed to reveal the vast brick-and-concrete wall at the back of the stage as well as many technical inner workings of the performance space. Slowly, dancers moved into the large empty space to the right of the fans, appearing to be strewn forth by the manufactured gusts of wind and not of their own volition. Gradually their white costumes–drapey shirts and wide-legged pants–were shed in the direction of the blowing air to expose jewel-toned leotards in various styles on the women and colored briefs on the men. One shirt was blown compliantly offstage into the audience. Meanwhile, the bodies on stage brightened under the lights, and the choreography assumed greater clarity and eloquence with the removal of costume. The performers seemed introspective, as if they were lost in the work. I became lost with them. Movements bled into each other. A hand fluttered across a rib like fish gills, and the gesture reminded me of breath, of quiet pounding excitement.