He’s My Brother, She’s My Sister

As a fairly new Denver resident and a lover of all arts, I’ve made it a priority to delve into the local arts scene, hoping to unearth the city’s many talents and artistic treasures. This translates to frequent excursions to local galleries, theaters, collaborations, and music venues.

One band I’ve come to adore for both its artistic ingenuity and immense talent is Paper Bird—a Denver gem I collaborated with back in the fall for Wonderbound’s (formerly Ballet Nouveau Colorado) production of Carry On. So, it was a no-brainer when it came to whether or not I would attend their CD release party at the Oriental Theater back in March to celebrate the creation of their newest album, Rooms. I expected a great night of music from Paper Bird, but what I hadn’t bargained for was discovering a new musical obsession—one from West of the Rockies, an eclectic LA band called He’s My Brother, She’s My Sister.

With an edgy, indie sound, rock-star worthy attire, and a catchy name, the charisma of the entire ensemble was palpable. But, as a dancer and rhythm-driven individual, I found myself particularly drawn to the band’s percussionist, Lauren Brown.

I’ve seen many drummers that can rock—the lead singer and ferocious drummer of rock-a-billy band Cowboy Mouth, Fred LeBlanc, comes to mind. But, I’m specific in labeling Brown as a percussionist and not merely a drummer. Standing high atop her instrument, Brown towers over her fellow musicians, pounding out a song’s rhythm with both her drumsticks and her tap shoes.

“I’ve been a dancer for a large part of my life,” says Brown.

Starting with modern dance when she was about four or five, Brown picked up tap, jazz, and ballet a few years later, and it wasn’t long before dance had become an integral part of her life.  By high school, she began to focus more on tap dancing and developed a “great love” for the style of movement.

Formally trained in dance, Brown was mostly a self-taught drummer—it’s something she picked up only two years ago, which is surprising given her ease and skill with a pair of drumsticks. With the help of a few friends, she learned the basics, but discovering out how to tap dance and drum simultaneously took a more trial and error approach.

“I mostly had to figure it out for myself,” she explains. “Nobody really knew how to [drum while tap dancing], including myself.”

Though she had to carve out her own technique, Brown was able to hone her special craft because of the many similarities she found between the two disciplines. “They are tremendously connected,” she says, having approached learning the drums the same way she approaches learning new choreography. “I break it down into individual physical sequences, then put it all together. The phrase begins with the tap of the foot and ends with the beat of the drum. It’s all one dance move.” She adds, “Also keeping time is keeping time. You have to pay attention to the rhythm in a very similar way.”

While at first it may seem an odd artistic trajectory for a tapper to get involved with a rock band, Brown has known the brother-sister team behind He’s My Brother, She’s My Sister since college; so, getting involved with their musical journey and working together felt like a natural choice.

Now, Brown is thrilled to call it her full time job and the rock group is currently tackling a busy summer tour schedule, performing in cities throughout the U.S. and U.K. 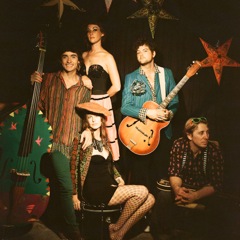 Fun Facts: What Makes the Tapper Keep On Tapping

Brown sites tap legend Savion Glover as one of her biggest inspirations, calling him a “king.” She says, “I wish I had his ability to create rhythmic patterns…[and] to riff like that.” Brown also admires his “freedom and the flow his upper body.”

Does she have a favorite song to perform?

It’s not an easy question for Brown to answer, but she does confess that she enjoys performing a cover of The Velvet Underground’s “What Goes On.” She revels in the challenge and speed of the song. “It’s so freaking fast, and my tap is just constant,” expresses Brown. “It ends up being a test of stamina while trying [at the same time] not to speed up [or loose] the groove.”

See Brown in action for yourself and find out if He’s My Brother, She’s My Sister is coming to a city near you by checking out their website.

Stephanie Wolf
Stephanie Wolf is a public radio journalist based in Louisville, Ky. She's also a DIYdancer co-founder, and developed and produces DIYdancer's UnSequenced, a podcast about the choreographic process. She danced professionally for 12 years with ballet and opera companies.
Recent Posts
Showing 3 comments