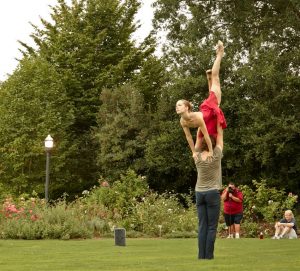 Recently, however, Atlanta has experienced vital shifts to its dance culture.

The shift of performance venue from the proscenium stage to the street, park, garden, or farm has made dance more accessible to the public, and often for little or no cost. On any given weekend, glo dancers can be spotted in midtown, on the streets interacting with the public or onsite at The Goat Farm Arts Center on the west side of Atlanta, their creative home. Decatur’s CORE Dance Company is just entering the next stage of an International Exchange Project. The contemporary dance company, which rehearses in a studio space on the Decatur Square, just recently returned from a European tour.

Moreover, the dancers of Atlanta Ballet’s summer contemporary dance project, Wabi Sabi, can be seen throughout the summer performing at a myriad of Atlanta’s cultural venues, including the High Museum of Art, the Decatur Book Festival, and most recently, the Botanical Gardens.

Company artist John Welker, who founded the offshoot in 2011, believes in the growth of the contemporary dance scene in his city, which is part of his reason for starting the project. The company name, Wabi Sabi, describes the Japanese view of finding beauty in the sincerity, simplicity, and integrity of the natural world.

Royon’s Me in Your Fall, a swanky duet, performed by Kelsey Ebersold and Jared Tan, highlighted not only the dancers’ technical abilities, but also their capacity to be grounded and versatile in their movement.

Ebersold and Tan grooved, twisted and turned to the sultry electronic beats of American singer Dani Siciliano, while last minute wanderers arrived and found a place on the Great Lawn to watch the dancers.

Myers’ Lost Rite, set to a musical score by Bela Bartok, seemed to beckon the audience into a secret sect of society in which the dancers were tribe members.

Kiara Felder, Yoomi Kim, Jackie Nash, Christian Clark, Heath Gill, and Brandon Nguyen filled the Great Lawn with focused, driving, ritualistic energy. The dancers executed intricate arm and foot gestures, as they flowed into and out of architectural postures and stances. Nash was a particular standout, moving as if she were painting with her body in space.

Alessa Rogers’ movements both entranced and coaxed her partner, Benjamin Stone, as the two folded into each other’s arms only to part ways soon after.

The evening concluded with Pulinkala’s new work, Rinpoche, celebrating the light and life of those closest to the heart.

To a haunting score of Rachmaninoff and F.M. Einheit, five dancers gathered around a rectangular light source, basking in the intensity of its glow. A highlight of the work was the intricate and creative floorwork, executed effortlessly by the dancers.

Wabi Sabi’s genius seems to be in the company dancers’ unique ability to expertly transition from choreography requiring classical ballet technique to raw, grounded contemporary work rather than in the selected choreographers’ unique use of the performance space. In the future, it could be interesting for the audience to experience the dancers interacting with the chosen venue more dynamically rather than simply dancing in it. 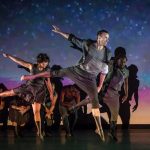