On Sunday, September 13th, I returned to the Laguna Playhouse for the Festival’s second presentation, Alonzo King’s LINES Ballet. The big draw seemed to be their newest collaborative work, “Biophony,” but I was impressed by their program as a whole, offering relief from the strict classicism in dance that is often seen in the venues south of LA, and demonstrating a single voice surely as original as I’d initially perceived Osnel Delgado Wambrug’s to be, and plenty honed after 32 years at that. Good call, LDF, on showcasing the merits of a single-artist, established company in addition to the repertory company Malpaso.

In “Concerto for Two Violins,” set to Bach, the dancers–in strikingly elegant, dark velvet leotards for the women and shorts for the men–started off as totally separate entities, all scattered soloists on stage. A quartet in the middle of the piece, by contrast, featured four dancers in light grey. Interconnected, the two men and two women essentially danced one solo together, hardly ever losing contact. I loved that each, in turn, really relied on the structure they made for support, as if they wouldn’t have been able to retain any verticality without the others there.

The “Men’s Quintet” that followed similarly relied on the cohesiveness of the unit, while pulling individuals away from, yet still framed by, the group. The men were all dressed alike in shimmering silver jeans, but the piece served to highlight their different ways of moving, both different from each other and different from the way men’s dances often construe their subjects to be–this was allowed to be softer, more supple, feminine at times. It began and ended with me wholly captivated; as the curtain rose, the five dancers were walking slowly upstage, facing upstage, as one then two fell feather-like to the ground; before a too-abrupt blackout, there was a lengthy, never boring, and exceedingly technical solo performed by one of King’s (and my own) clear favorites, Michael Montgomery, as the others created patterns around him with the same slow walking.

Finally, “Biophony” was the collaborative effort of King, his dancers, and “soundscape artist” Bernie Krause with composer Richard Blackford. “Biophony” is Krause’s term for the natural symphony that fills the world. Or did so before man invaded.

King’s translation of animal sounds into movements was abstract but clear. Costumes, like floaty, slow-moving organza and feathered skirts, enhanced the movement and the human-ness of the bodies wearing them, while hinting at the colors, textures, and shapes of the four-legged, winged, or no-legged creatures that would call home the various environments Krause had recorded: the Americas, Borneo, and Kenya. Similarly, the movements capitalized on this animal-palette (or ecosystem) of behaviors and impulses, straying far enough from ballet without going as far as making actual animal impersonations. I was able to spot a praying mantis rubbing its limbs together, for instance, and sting rays in seal-like matte black unitards, quickly-stepping hands motoring the creatures forward, threaded under their pelvises so their legs spanned out like wings.

As the dance traveled us to various corners of the world, my mind played with the idea that here, rather than follow my initial inclination to find animals I recognized, I could encounter something new, and could wonder at the function, say, of a foot, or a wing, or about the shape of this unknown being, described not necessarily by the human framework we constantly take for granted, but by the original set of movements and body positions which were slowly revealed to me. 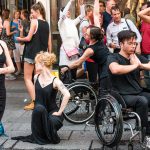