A Stream of Consciousness Response: Jay Carlon’s ‘Out of Bounds’

It feels a little strange to tell the concierge at the Annenberg Community Beach House I’m here for the performance. I go to the beach all the time—almost every day; my husband surfs—and rarely has my dance life had the occasion to intersect with the sandy, windswept persona his habit has cultivated in me. But the man behind the desk doesn’t skip a beat. “Courtyard,” he says, pointing me to an area lined with fat palms. Cars hurl past on Pacific Coast Highway as I make the short walk up the beach.

Clothespins hang on a line, sharing space with a couple pairs of shoes, laces tied and tossed over in Los Angeles’ symbol for drug transactions and/or cultural rites of passage. A few dark blue jumpsuits give a small percentage of the pins a job to do. I am familiar enough with choreographer Jay Carlon’s work to know that the flattened cardboard surface over the concrete ground will function as a dance floor, and that under the patchwork of masking tape are mics that are wired to the unassuming table in the corner. A solitary laptop rests there, waiting. As I take a seat (more chairs are being wheeled in by a staff member), Carlon kneels on the cardboard, pressing down a piece of tape. He throws a thumbs up over his shoulder and moves a suitcase, then assumes a downward dog. Kids wearing sunglasses lounge on giant bean bags near the edge of the dance floor. The sun hovers at about the height of a palm tree in the distance. It’s making its descent.

It’s 5:05 when I look up from my program and Carlon is facing us, sitting on his suitcase. He greets and thanks everyone for coming. He introduces himself as the choreographer-in-residence of the Beach House, selected by the city of Santa Monica. “I’m going to ask you to join me at the shore,” he says. When we reach the sand, we should remove our shoes. Feel its texture between our toes. As we approach and view the performance, he says, “Refrain from speaking. Tap into your body. Breathe.” Feel sun on skin, observe the looping sound of waves, the “voice of recreation.” He says he has asked the 30 performers to remind him repeatedly throughout the day to breathe away his anxieties. I’m appreciative that he’s paying forward the favor, although it’s hard to imagine not feeling relaxed here.

We collectively stand and begin to move en masse. The beach is wide, and it takes a long time. I savor the thought that if this were choreography, I’d be pacing myself, anticipating my favorite part—continually reminding myself to stay present. But, of course, this is all Carlon’s choreography.

He stops us before we reach wet sand, before I witness any movement. We wait for the back of the line to catch up. “Think of your biggest accomplishment,” he instructs. Your proudest journey. I wonder about what might qualify, overhearing another woman tell a friend about two marathons she’s run.

Again I look up from the sand and from my notes, notes I’m rewriting here. I do not know the time. I’m stopped in my tracks by what for a half second are seals emerging from the sea. Of course, it is the promised 30 performers. And this must be…

Slowly, slowly, they move forward, from a full-body slither to their forearms to all fours. They are wet. Wearing what looks to me like work wear—button-downs and blazers. Waves crash over them. Those that emerge first are also wrapped in long ropes that I mistake for seaweed at first. It trails backwards through the muddy sand to the sea.

Music—emanating from a speaker in a tub—conjures the reverberative quality of being deep underwater while also calling forth the squawking of gulls, a feeling of breaking into air. For a while I do not realize that the musician, Alex Wand, is present, conducting with two remote controls. He wears a fedora and sunglasses, his pants rolled to his calves.

The suitcase and two wooden crates are also here, each filled with gold foil bundles. As the performers stand, they walk one by one to the nearest of the three stations. They slowly unwrap the bundles, which are simply large sheets of the foil. They enrobe themselves in them, and without having to hold the crinkly material, it stays on, since wind is blowing offshore. I am reminded of seashells—new homes. Of superhero capes and beach towels. Up ahead, three small children watch, similarly wrapped in bright green, blue, and fuchsia ones. Carlon silently signals us to follow the performers, who are already moving back toward the courtyard. They hug the foil around their shoulders.

A boy guards a sandcastle as we cross. The musician now takes up his guitar. Performers turn and look back, waiting. For us? Or for other performers? One begins to sing,

And the rest chime in. Audience members who also know the song join them. As it always does, the walk back seems to be going faster.

Suddenly, three cast members fall to the sand. There they remain until other cast members help them up. When the motif is repeated, two audience members debate whether they should or shouldn’t do the same. A third woman arrives, bending to brace the person’s shoulders without much hesitation—would the performer had stayed down if she hadn’t?

By the time I return to where we began, dancers are already making use of the clothespins, hanging their wet garments there. Others take down the jumpsuits and change into them behind makeshift cardboard-box screens. Already dressed, Carlon moves a push broom across his cardboard dance floor.

He and three additional dancers—Samantha Mohr, Isaac Huerta, and Christopher Bordenave—enter by way of the floor. They are seals again and also migrants, fallen from exhaustion. By initiating simple movements the rest of their bodies respond and continue without effort, ushering them to the four corners of the cardboard surface. The sound develops in accordance with the motion that follows: sweeping, striking, and silence are all brought to bear upon the mics.

A motif of walking from the corners and meeting at center, two falling, all falling, becomes significant. Also established is a hand to another person’s chest and the head that swivels around it. These ideas develop into a trio, then devolve into a duo (persistent eye contact still involves the third dancer) and finally emerge as a solo. The soloist still seems to partner an invisible entity, or at least an unattached one, occasionally waiting while I imagine another body moving through the pause. A few of his movements reverse themselves as if tethered.

The partnering comes back. Two men drive through a unison phrase only to lift their arms, arching back, when for a heart-fluttering moment Bordenave falls backward into Huerta and is placed lightly on the floor. Later, Mohr entrusts her small frame fully to Bordenave, again initiating movements that seem to follow through of their own accord. The pair find postures of equilibrium only to tumble away from them, occupying a small overlap of active passivity.

The section reaches a climax when all four move together, three lifting and manipulating the fourth before seamlessly rearranging and repeating. It’s a device we perhaps rely too heavily on in contemporary choreography—I’ve seen and done the mechanics before—but executed here with the right balance of momentum and surrender, it feels like an appropriate continuation.

Mohr and Bordenave share a final duet, occupying a mostly-low level. Again, I observe their balance of reliance and self-sufficiency, the seals-slash-fallen migrants arriving at something like interdependence. They are subsumed by the floor: Carlon and Huerta are lifting two corners of it and rolling it up while the dancing continues. Soon all are engulfed by the enclosed cardboard wave, another massive sea creature, a perilous tunnel, or simply another transformation of the elements Carlon and company presented here tonight. 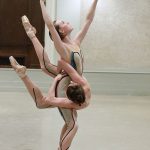